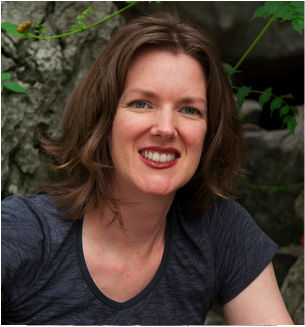 WB: In The Declarable Future, your poems attempt to engage your audience from a position as representing the neglected natural world and, thus, are heavily informed by it. How did you become so concerned for the well-being of natural world?

In my poetry, I am interested in exploring the potential that humans have as connective creatures who have within themselves the ability to be available to a much broader range of awarenesses than we typically acknowledge in our culture. For example, when we encounter a tree after the grove around it is cut down, what is told to, and registered within, our bodies? Somewhere back in time we stopped viewing that communication as essential, and so we stopped engaging it.

Part of what poetry does is expand our understanding of what it means to be human. This requires, then, that poetry also expands our experiences and understandings of our potential for experience, resonance, capacity… What part of ourselves do we stymie by no longer hearing the relevant interests and ways of being held by non-human entities? To locate these abandoned capabilities, I spend a lot of time seeking out new relationships with the world and thinking about where these aspects of the world resonate with and inform our capacity for perception, awareness, becoming, inhabitation, and dwelling.

Given that, it is hard to separate my concern for the natural world and my concern for myself and others. The world has been used, by humans, beyond its capacity to remain healthy. There simply is no greater concern we could have than the well-being of the world. That said, I rather doubt that we can save the world for it to sustain human life. However, I very much believe that poetry can help to salvage within humans a sense of wonder, connection, resonance, and majesty. Going forward, these will be much needed.

WB: There's almost a bitterness toward the human race for its abhorrent treatment of animals, animals who, now, must "never trust water or anything that beacons beckons / with the reflection of ourselves." There's an anger toward a human race so preoccupied with the "God who sleeps a lot when [we] need him most" they forget the world of forms and Oneness they indwell. What experience informed this frustration? And what relationship do you see your own poetry having to these neglected "worms [who] are better than stars / because [they] are here"?

JB: I’ll admit to being incredibly moved when I go to thrift stores and see clothing which is there utterly at some other-than-human animal’s expense. I just feel moved if not staggered by what that abundance asks of other-than-human animals, and what kind of thank you note is written in the casual indifference of not according that abundance with very simple kinds of care: hand wash gently. It sounds like a small thing, I suppose. But our relationships to the world and to ourselves is bound to our relationships to the stuff of this world.

And, oh: worms. Magnificent creatures. While the stars are far away, eternal, and unaffected by us, the worms are right here. We can be astonished by the world of the absolutely available. I would love it if we felt as informed and inspired by the World of Here as by the stars.

WB: Czeslaw Milosz writes in Dedication, "What is poetry that doesn't save / nations or people?" What part on a broader scale do you see your poetry as helping to save (or remember, the single salvation Milosz saw as now possible for the victims of the war) "the big us - the world [you] love?" Does poetry have any power for salvation for humanity or the natural world?

JB: I think the answer to your first question addresses this.

WB: In just "Which Particle the Particle" you engage a lot of subjects: biology (enzymes, cells, osmosis), philosophy (time, determinism) physics (particles, string theory), religion (eastern monism), astronomy, cosmology, and not to mention music and literature (Whitman and Dylan). Do you personally read in and engage all these subjects, just hear about them on the radio (like Dylan and the experiment), or what? What culture and media informs your poetry and through what mediums?

JB: I love this world’s eclectic heap of things to be fascinated by. I tend to read broadly: cereal boxes, novels, assemblage instructions, science magazines, poetry, obituaries, neuroscience, sociology, watershed reports, parenting books, cookbooks, letters to the editor, marginalia in thrift store books, dictionaries. I’m compelled by the assemblage of ideas, how the matter of what it takes up informs the way the idea is engaged, how particular logics are formed, the textures of ideas. In the poem you mentioned, these are all things I am very interested in if not fascinated by—as much for their individual ideas as for what happens when they start getting pushed together. Plus, text and images are just so exciting: it’s one area where greed seems acceptable—eyes are so grabby for what catches their interest.

WB: There's an imminence bordering almost on anxiety in your poems. Imminence and anxiety which demands the reader to read and act. What are we to do when we hear the "sound of longing... poured down into the long necks of birds"? What's the moral imperative, or is there one?

JB: There probably is a moral imperative, and action is a good place to begin, so yes, let’s say that action is the imperative. The action itself will differ from person to person, though. But the impetus for action might originate from a common place. That place is primarily one of attentiveness, of giving the self room to recognize the resonant part of the self that speaks back to the poem.

Sometimes, this means that the imperative is for a person to give the self enough stillness to allow an image to resonate. For others, the imperative might be opening further to wonder. For others, action. There are so many actions, large and small, which can follow even the most minute shifts or recognitions of the important work the self does in asking to become more fully realized.

WB: Could you explore who the Lost Man and the Man With the Loupe are and what function they and their interactions serve in your book? I'm really fascinated by them.

JB: I have been asked to quantify the humanity of my students. As if it is not infinite or beautifully incalculable. As if it is normal that a rubric for this assessment exists. The person with the loupe believes—truly believes, and probably with a positive, cheerful fervor in it all being for the best—in this and other such rubrics, and uses it to measure and measure that which should be beyond measurement.

There is a horror, I think, in using calipers to make sure a building is still standing, in assessing the quality of a day by using a magnifier to look at a calendar. And a larger horror in how the people around the person with the loupe allow those measurements to convince them that the rules which follow must therefore be necessary. They lost their children, their neighbors, their knowledge of the world around them.

The lost man appeared in my first book in a poem in which he'd lost his homeland and tongue to war. In this second book, his character grew. He is a witness, one who understands that the world is many things and so can have many logics: he sees dust and understands it could be his dead children who have returned to him, and he sees night's darkness as a reprieve from having to be a specific shape. The world is a gift he wanders and wonders through. He is not bound by the same rules because he is a foreigner to everything he encounters, so he simply allows himself to see the world in versions of what it is without judgment. I believe he is the immeasurable, the thing in which I put my hope and take heart.

WB: The one last thing I'd like from you (if you have just a few more minutes) is a personal anecdote you've had while immersed in nature which has profoundly influenced your view of nature as these manifestations of the self to be realized. Describe it to me, very briefly. I like to begin my feature pieces with a bit of creative writing, and I'd like an event to extrapolate on.

The year I lived alone in a remote cabin on the Rogue River, I learned how to talk to rocks. Large rocks that jutted out of the river, and one boulder in particular that rested just below the cabin. It was not hard to talk to rocks, but learning how to listen took a little more time. Eventually, the trick was to enter time differently. Once time no longer existed in discrete sections, and was instead a giant animal entity which sat with us but did not have or regard cause or effect, I began to understand the stones differently.

When I was living in the most beautiful middle of nowhere in southern Oregon, I called my small dog in from outside. When I shut the door behind him, I saw something which made me freeze: a giant cougar, pressing herself flat at the edge of the cleared grass. I locked the door, and she got up and trotted to the driveway... where I then saw her two young cubs. I understood she had brought them in for a hunting lesson: my small dog, their hunger, their need to know what to do. And later, a bear got drunk on fermented apples and I wondered if his drunkenness might make him take a break from doing somersaults in the meadow to rip through the wall of the cabin to eat me. It was when I was taking week-long walks and sleeping outside that I felt no fear of the world which, from inside the house, threatened. I never did see a cougar while hiking or camping. Not a bear, not an elk, not a skunk. They were probably in their own world, looking out, wondering what crazy thing I'd do to threaten their world.

I am not sure how you mean "nature." The question seems to suggest it exists outside the self or can be separated form the self. I doubt it. Immersion has something to do with this, but so does just paying attention, which is the writer's job. We are supposed to pay attention to the voices of things. If we can't understand the speakings, then we can at least acknowledge the existence of utterance, the likelihood of equally valid self interests. I grew up on a small farm where we had chickens, cows, rabbits. We ate animals we'd loved and cared for, and where we buried them, it just seemed like the grass had a different voice. I was struck by that: how grass seemed to inform the air around it. How that memory was tied to my own memory of loss and gratitude. And how one did not seem more than or too different than the other.
Powered by